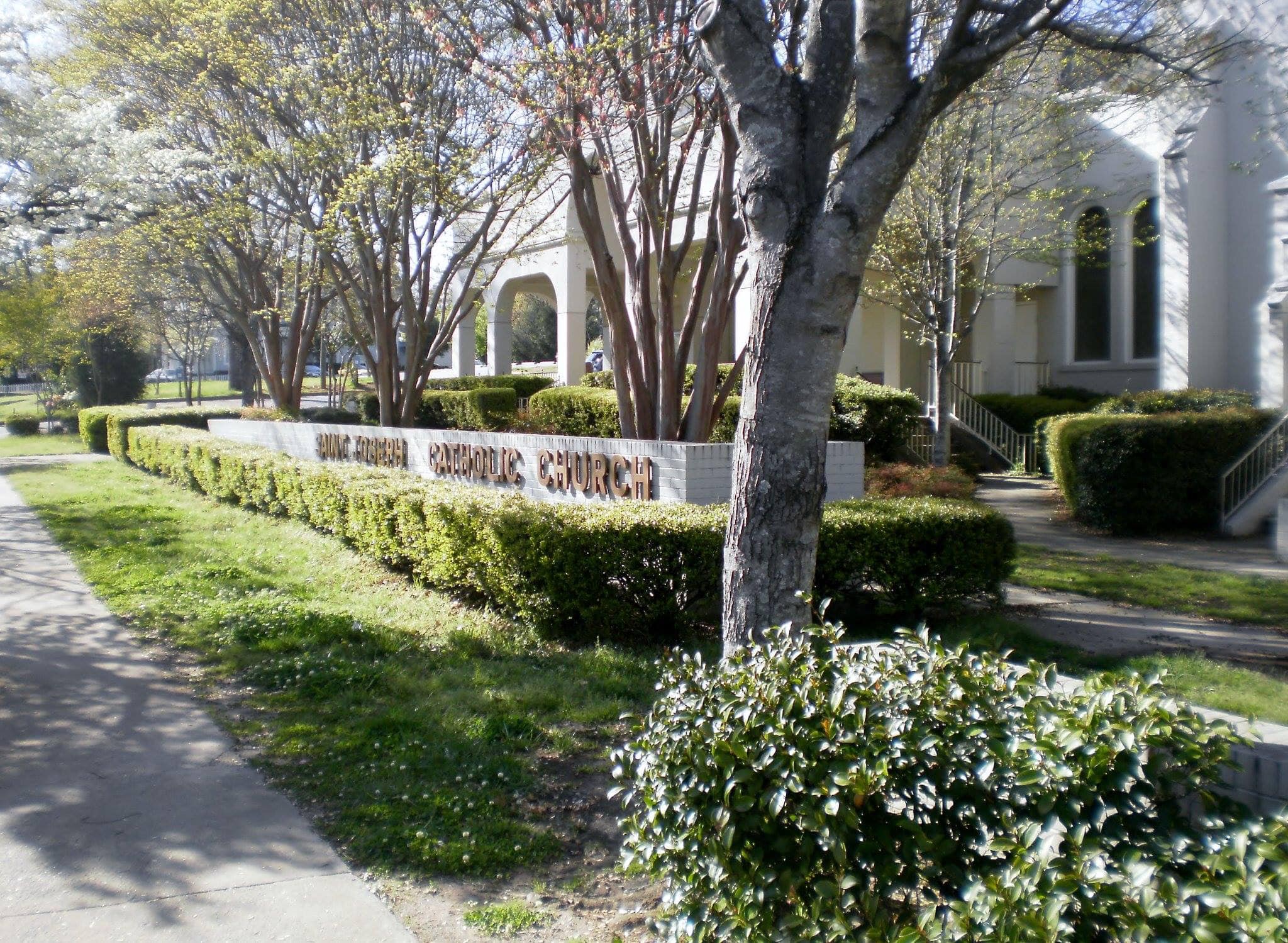 The Catholic Church of St. Joseph began originally in the Diocese of Savannah. In 1873, Bishop William Gross of that city visited Athens and met with ten or so active Catholic families in the area who asked that he purchase land and start a parish in Athens. In the next few years, the parish became more formally organized and was given the name of St. Joseph. A drive to procure funds for the purchase of a site for the church was begun…the first $100 was given by Dr. Robert E. Bloomfield.

In 1881 a lot containing a small wooden building was purchased from the estate of Thomas R.R. Cobb, a General in the Confederate Army who died in the Civil War. The agreed upon price was $2000. This small church served as the first Catholic church in Athens for nearly four decades by visiting priests, who often could only celebrate Mass here once a month.

By 1911, the first resident priest, Fr. Harry Clark, was appointed. Through his efforts, funds for a larger church building were raised from as far away as Philadelphia and New York. The building, located on Prince Avenue, was dedicated March 30, 1913. An outstanding feature was the 18 large stained glass windows created in Germany, with each window depicting an event in the life of Christ. Three years after the church was completed, a rectory was added. As a missionary parish, its ministry extended to 23 counties in the northern section of Georgia.

After 16 years as Pastor, Fr. Clark was transferred to St. Anthony Parish in Atlanta. Just before his departure, he wrote a note to his successor stating, “I leave Athens and the missions free of debt.” His replacement was scarcely in danger of squandering the parish’s capital resources; on the mantle of the rectory, Fr. James King found the entire parish treasury…13 cents!

A parochial school at St. Joseph was started in 1949, under the teaching direction of the Missionary Sisters of the Sacred Heart. This same order had helped in the establishment of St. Mary’s Hospital in 1937. In 1968 the missionary sisters were replaced by the Sisters of the Immaculate Heart of Mary as faculty.

Prior to desegregation, African-American Catholics in the area attended the Sacred Heart Parish of Athens with Fr. Dale Freeman. In the 1960s, that church was disbanded, and parishioners were integrated into the parish life of St. Joseph.

Under the guidance of Fr. William Calhoun, the first African-American pastor of St. Joseph, a drive was started in 1982 to fund the renovation of the church and rectory and begin construction of a new educational complex. An astounding $800,000 was pledged and the new school opened in 1984, with the church dedication on December 6, 1985.

Over its last 100 years, 21 men have served as Pastors of St. Joseph Parish. As of 2016, the parish has grown to over 2000 active families and represents our multi-cultural community of Athens.

Needing to expand further by 2005, under the guidance of Fr. David McGuinness, fundraising was started to procure property on Epps Bridge Parkway for a new church and school campus. The new school and multi-purpose building opened in 2012 and there is a current campaign underway for the building of a new church, where the beautiful stained glass windows will once again grace our church.